On This Week in Sport History ~ Swimming 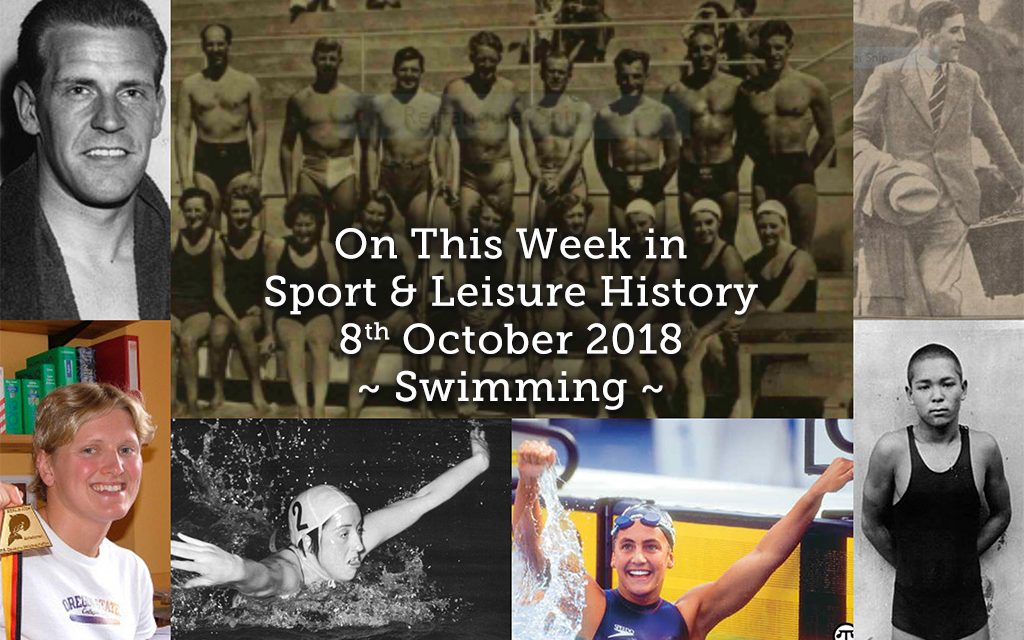 William John Brockway was born on this day in Bristol in 1928. He won the first of his seven Amateur Swimming Association British national titles at 100y/110y backstroke in 1948, the same year he reached the final of the metric equivalent of that event at the London Olympic Games. His first major international medal came at the 1950 British Empire Games where he placed second behind South Africa’s Jackie Wiid and it was the next edition of these Games that was to be the highlight of his career. In Vancouver in 1954 at the newly renamed British Empire & Commonwealth Games he held off the challenge of Lincoln Hurring to become the first representative of Wales to win a gold medal in swimming at any Empire Games. He narrowly failed to make a second Olympic final in 1952 but won a bronze medal at the 1954 European Championships in Torino. John was the captain of the British swimming team at his third Olympic appearance at Melbourne and continued to swim at the highest level until 1958. His last international event was in 1958 at the British Empire & Commonwealth Games where he took the competitors oath and swam in the finals of both the 110y backstroke and the medley relay finishing sixth both times. In addition to his ASA titles John was Welsh backstroke champion eight times during his career. Outside the swimming pool he, who was a qualified engineer, spent his working life in the steel industry in the Newport area of South Wales.  He died aged 80 in Newport on 26th July 2009. 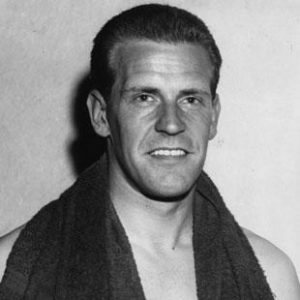 Japanese swimmer Kuzuo Kitamura was born today in 1917 in Kochi. At the age of 14 years and 309 days he competed at the 1932 Olympics and was the youngest Olympic swimming gold medallist at the time, winning the 1500m, a record not broken until 1988 by Hungarian swimmer Krisztina Egerszegi, but he still holds the record as the youngest male swimmer.  He retired from active sports after the 1932 Olympics and later graduated from Tokyo Imperial University. Later he was employed by the Japanese Ministry of Labour. After his retirement from public service he became director of the Sumitomo Cement company in 1984. When he fought in Burma during World War II, his Olympic medal was given as a metal donation to the local authorities by his father, but they refused to accept the donation. In 1965 he became the first non-American inducted into the International Swimming Hall of Fame. He has also held various positions in the Japanese Swimming Federation. He died aged 78 on 6th June 1996. 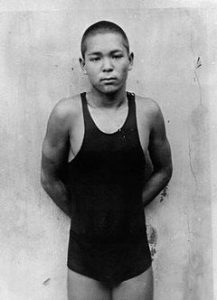 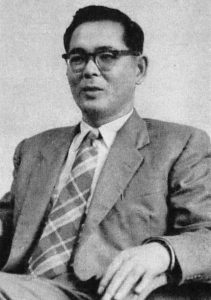 Jutta Langenau was born on this day in Efurt, Germany in 1933.  Affiliated to SC Turbine Efurt Club she burst onto the swimming scene in 1954, winning the first European title at Torino for the former GDR when she won the 100m butterfly with a new world record 1:16.6 minutes. She qualified for the 1956 Melbourne Olympics where she came sixth in the 100m butterfly. Between 1949-59 she won 14 East German titles. In 1958 she finished fifth at the European Championships in Budapest. After her competitive career, the graduated teacher of pedagogy became a swimming coach and, amongst others, coached one of the world greats, Roland Matthes. In 1954 she was the first sportswoman elected into the Volkskammer (People;s Chamber), the parliament of former GDR. She passed away at the age of 48 on 9th July 1982. 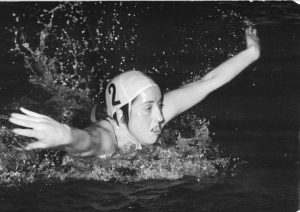 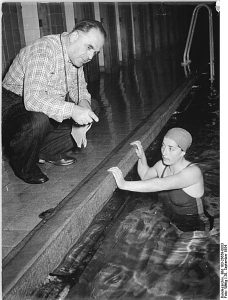 Another German swimmer, Birte Steven, was born today in Hannover in 1980. Specializing in the breaststroke she was a member of SGS Hannover and is a ten-time All-Pacific honouree, and also a sixth-place finalist in the 200m breaststroke at the 2007 FINA World Championships in Melbourne. Birte qualified for the women’s 200m breaststroke at the 2004 Olympics in Athens, where she recorded the seventh fastest time of 2:27.42 to secure her spot in the semi-final run. She failed to qualify for the final, as she placed eleventh overall in the semi-finals, with a time of 2:29.22. She is also a member of the swimming team for the Oregon State Beavers, and a former student major in psychology at the Oregon State University in Corvallis, Oregon, USA. 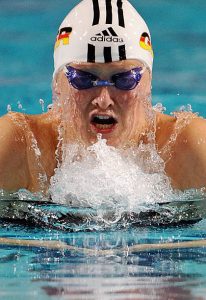 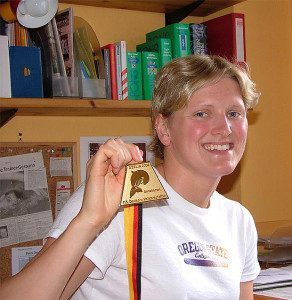 The wonderfully named Mostyn Yanto Ffrench-Williams, also known as “Mickey” was born on this day in London in 1914. As a member of the Penguin Swimming Club in London, he represented GB at the Olympics and England at the British Empire Games, competing in both freestyle and backstroke events. At the 1932 Games he finished 5th with the GB team in the 4x200m freestyle relay and was eliminated from the 100m induvial freestyle in the first round. Four years later in Berlin 1936 the relay team were placed 6th and he was again eliminated from the 100m freestyle in the first round. However he was more successfully at the Empire Games where he won silver with the English 4x220yard relay team and a bronze in the 3x110yard medley relay (no butterfly stroke was swum at that time, hence only 3 swimmers). Mickey also competed in the 100yards freestyle, finishing in 6th.  In the 1938 edition of the Empire Games the 2x220yard relay team of Frederick Dove, Norman Wainwright and Bob Leivers, together with Mickey, went one better, winning the gold medal. He saw service in World War 2 as a member of the Royal Navy and died aged 49 on 11th November 1963 in Fowey, Cornwall. 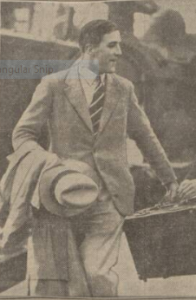 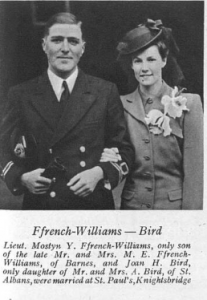 American swimmer Summer Elisabeth Sanders was born today in California in 1972.  Summer first came to international attention in 1989 when she won a silver medal in the 200m IM at the Pan Pacific Championship. In 1991 she won three gold medals at the Pan Pacs – 200m butterfly and both 200m and 400m IM. She also won three medals that year at the World Championships with a 200m butterfly gold medal, silver in the 200m IM, and bronze in the 400m IM. At the 1992 Barcelona Olympics, Sanders won two golds and four medals, winning the 200m butterfly and in the medley relay, with silver in the 200m IM, and bronze in the 400m IM. Summer swam at Stanford where she won nine NCAA championships, with six individual titles, two each in the 200yd butterfly, the 200m IM, and the 400m IM. She won eight US Championships. After the 1992 Barcelona Olympics she became a television personality, working as a swimming commentator, but also hosting NBA’s Inside Stuff for eight years alongside Ahmad Rashad. She served as a correspondent and host on numerous television programmes. In 2009 she started hosting Inside Out with Summer Sanders a show on Universal Sports. She also appeared on Celebrity Apprentice hosted by future US President Donald Trump. Summer was married for four years to American Olympic swimmer Mark Henderson, but they divorced and she later married Erik Schlopy, also an Olympian, he was an Alpine skier. 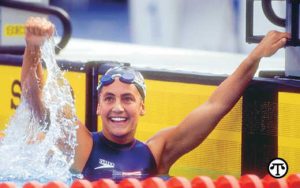 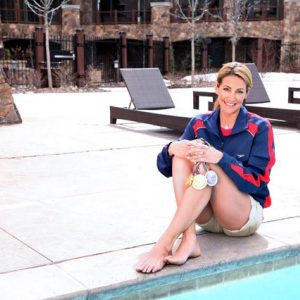 Jean Victor Rebeyrol was born in Bordeaux, France on this day in 1903.  He competed for Bordeaux Athletic Club until 1923 when he affiliated to ASPTT Bordeaux, he was one of France’s top swimmers of the 1920s, Jean became the national long-distance champion in 1921 and retained his title through to 1927. He was also the French champion in the 800m and 1500m freestyle events from 1923 to 1926. He set a national record in the former discipline in August 1923, which lasted just under a year, and also held national records in the latter and the 400m in open water. His most significant international appearance came at the 1924 Olympics, where he was eliminated in the opening round of the 1500m freestyle after finishing last in a heat won by Borg of Sweden. Following his competitive career, he worked as a swimming coach until his death at the age of 71 on 25th August 1975 in Pessac, France. 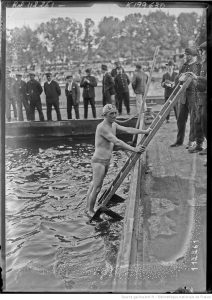 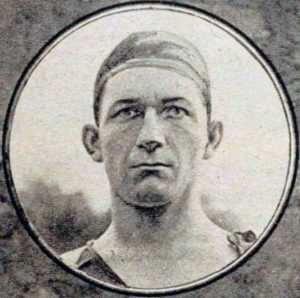 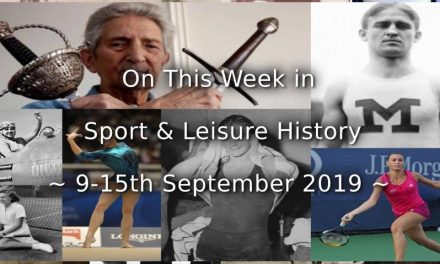 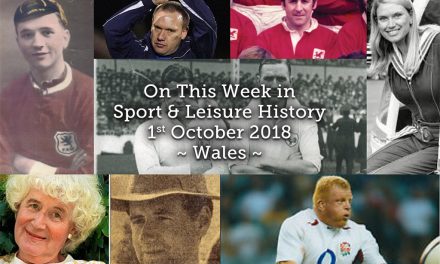 On This Week in Sport & Leisure History ~ Wales 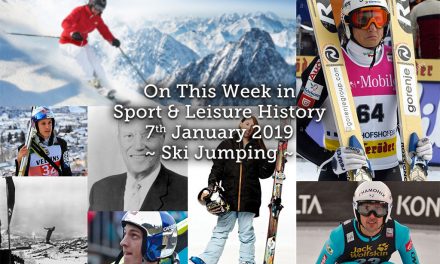 On This Day in Sport & Leisure History – Ski Jumping 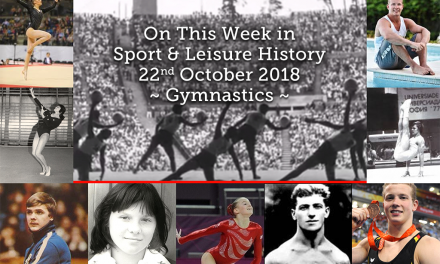 On This Week in Sport History ~ Gymnastics