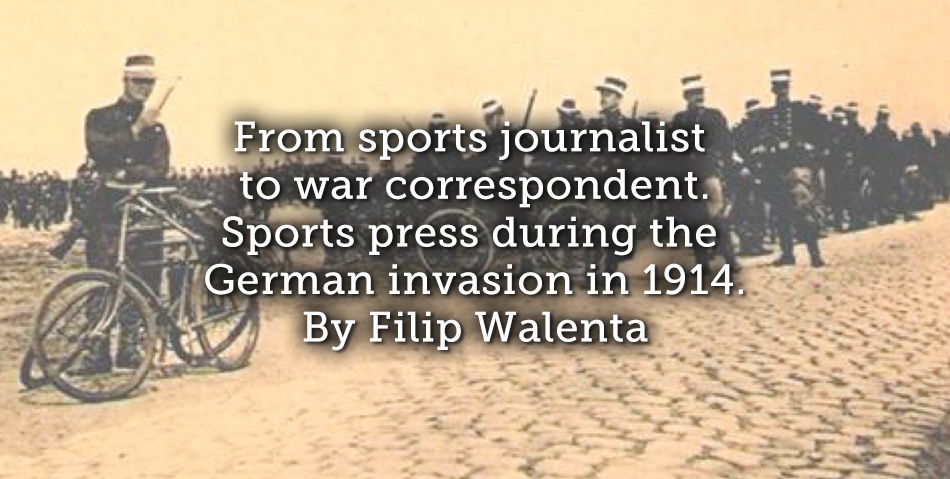 Many aspects of the First World War have already been studied, especially the trench warfare and the heroic battles, like those of Ypres, Passendale and many others. And since its centenary in 2014 the Great War has been put in the spotlight more than ever before. But there is still a lot to discover about what happened behind the enemy lines, although thanks to the increasing interest a lot of information has already been revealed.

In this article we enlighten the role that Sportwereld (Sports World), the leading Flemish sports newspaper at that time, played during the first months of the Great War and the hidden talents of the undervalued sports journalists.

Philippe Thijs was comprehensively celebrated by a crowd of fans at his arrival at the Brussels railway station on Sunday 2 August 1914 after his second time in a row overall win of the Tour de France the week before, while at the same moment only two hundred kilometers away the East German troupes attacked neutral Luxembourg.

During the afternoon, a three hour race, with several cycling champions was planned at the velodrome of Brussels, as well as the following day in Ghent, but due to the increasing threat of war most racers were called to arms by the military authorities, Meaning that both events were cancelled. 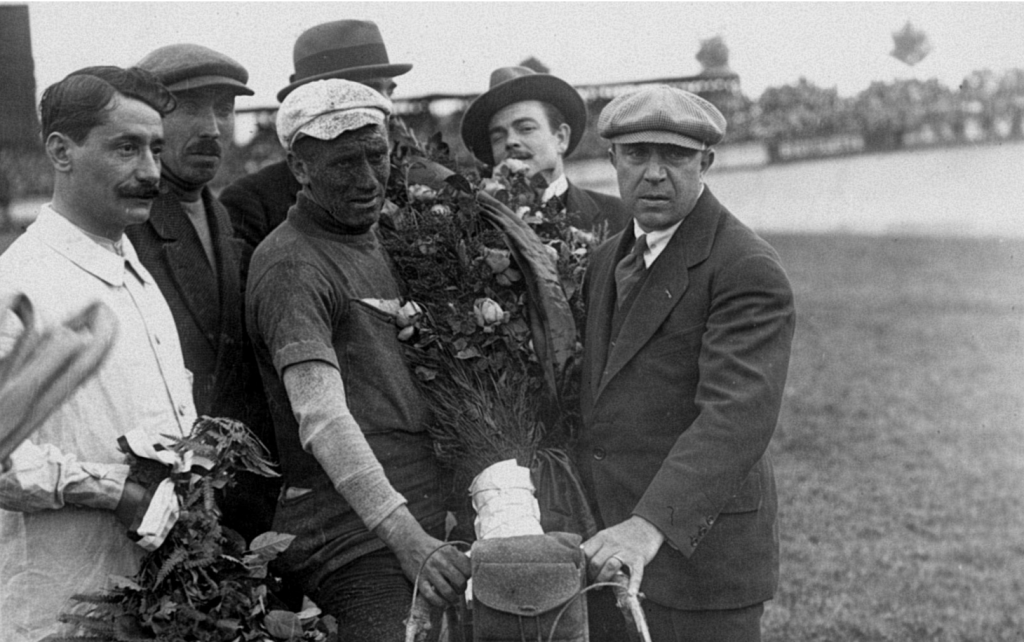 On Monday 3rd August, the day before the German invasion of Belgium, the editorial office of the sports newspaper Sportwereld wrote a special article, which was featured on its front page. They would consider the immediate future of the magazine and the way Sportwereld had to respond towards it’s readers concerning the apocalyptic circumstances.

“We have always done our duty, by giving information and discussing all kind of sports matters,

considering the thousands of readers Sportwereld has won in such a very short period of time.

are about to happen, we will not forget to fulfill our commitment.

how we will try to satisfy our readers, concerning the situation.”

“Velodromes (translation of the picture underneath)

cycling races. The people are sufficiently enough informed about the international complications to

realize that the general attention is focused upon other things than amusement. Consequently

all cycling races in the country are cancelled.” 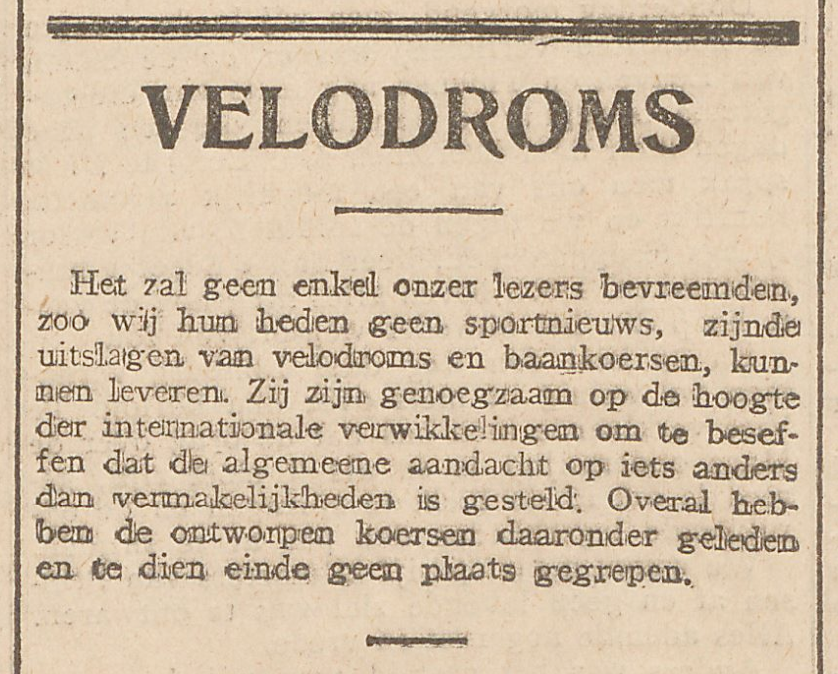 Two days later the decision of the editorial office were mentioned again on the front page: Sportwereld would be divided into two parts. The first part, called De Telegraaf (The Telegraph), would pay more attention to the war happenings in all aspects, the international political news and, in particular,r the diplomatic developments. The sports reporting in the second part of Sportwereld would be limited, as the coverage of warfare was considered of much more importance, however,  as all events were cancelled –  no sports news was distributed.

The Telegraaf-Sportwereld was published on a daily basis, and if new important information about the latest movements on the front was available, then an extra edition was published in Ghent and Antwerp at midday.

A remarkable fact hereis that the sports journalists started to operate as war correspondents; they not only wrote about the German advance on Belgian territory but also about the politics and diplomatic developments concerning the war. Their articles were written in the same style as their sports articles: post-romantic and bombastic, full of metaphors, with a lot of compassion for those who had to experience the horror and in such a way that the readers were able to easily imagine saw the whole battle field in their own mind’s eye. .

At the beginning of his first article Karel Van Wijnendaele, one of the founders of Sportwereld and the Tour of Flanders, humbly admidded :

“I do not desire to be the apostle of light, as I am entering new terrain where I still got a lot

to learn, but I have followed the incidents attentively and I will try to classify them, nothing more.”

The day before Karel had travelled to Liège by train and interviewed a Belgian officer who alleged that the German troupes had invaded Belgium in order to avoid the fortified strongholds along the Eastern French borders. Assuming that the French and English troupes would come to their aid, the final confrontation would be executed in the area South of the capital where the English and Napoleonic armies fought the Battle of Waterloo hundred years before.

On Friday 7th August he returned and saw that the center of the city was captured by the Germans. He wrote about this unusual experience a few days later :

“A visit to the Battlefield – An unforgettable day

Never, never in my life I will forget the 8 August 1914, because I have seen the monstrously

behavior of the war, with death and misery in all its cruelty. I have seen the brave small troupe

of soldiers who have been protecting the city for days against a ten times stronger enemy,

the population anxiously running in the streets, injured soldiers limping and carried away,

I have seen bombs exploding, canons roaring, and above all I have seen a dozen airplanes

flying above the city like birds of prey above an injured animal !

No, never, never I will forget this day.”

And a week later he wrote the visionary words:

“It is going to be a long lasting war, because the area of the battle field is too large and the

amount of troupes is too big before the final battle will determine the victor. Little Belgium

is a big link in the war chain, not only because it has imposed itself by its brave intervention

as a military force of value, but most of all because the fate of the country will be revealed

on the spot at the end of the war. Belgium has made its choice in the international dispute

and will inevitably follow the way of its allies. And there is no doubt that this way will lead to

Victory, but in the mean time the question is what role we will have to fulfill in the whole war scene”. 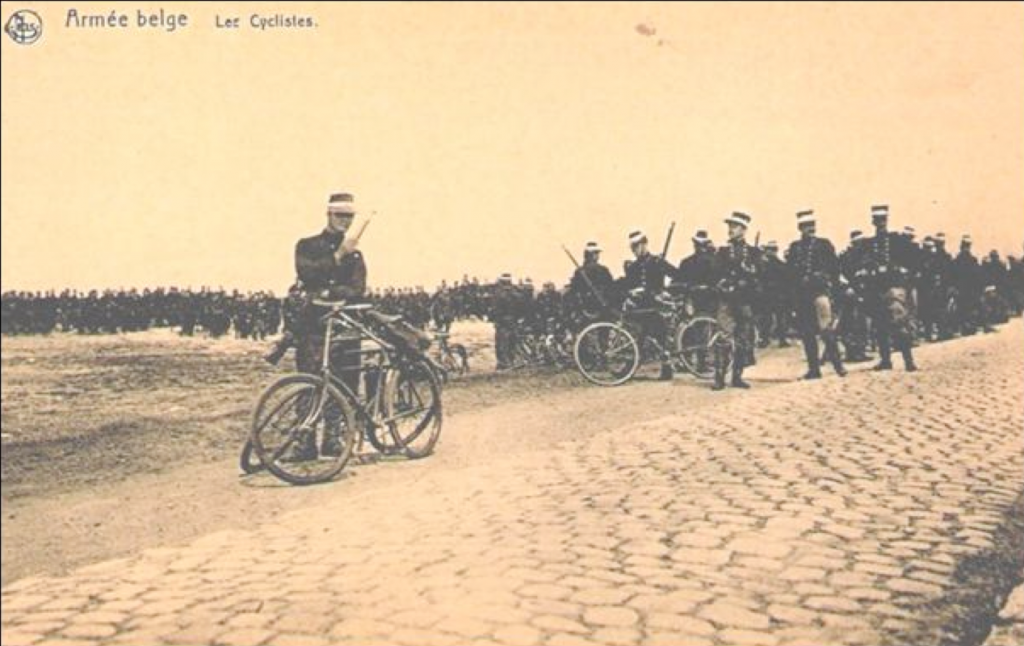 The Belgian karabiner-cyclists, called the Black Devils who fought in the Battle of Silver Helmets

Three weeks after the German invasion, on August 20th, the capital surrendered. Karel Van Wijnendaele and his colleagues quickly escaped their office in Brussels towards Ghent where they continued to publish De Telegraaf-Sportwereld.

Apparently the local newspapers were not very happy with the success of the newspaper, a journalist from Vooruit (a socialist newspaper) wrote his jealous disapproval in an article on 6th October (see below) :

Sportwereld rebaptized itself into De Telegraaf.

And since yesterday the first edition of De Telegram is published.

When Ghent fell into German hands halfway through October the publication of De Telegraaf-Sportwereld was forbidden.

Karel returned to his home in Torhout near Bruges where he would stay for the next four years. 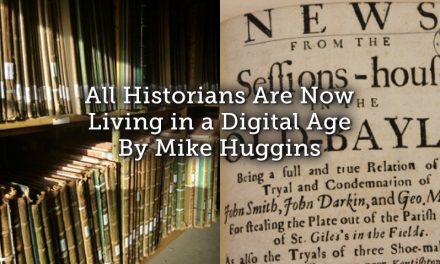 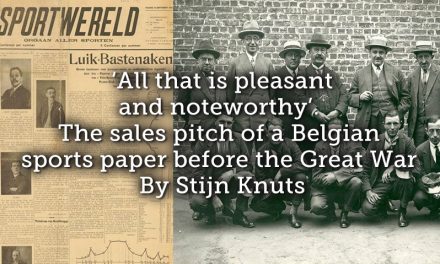 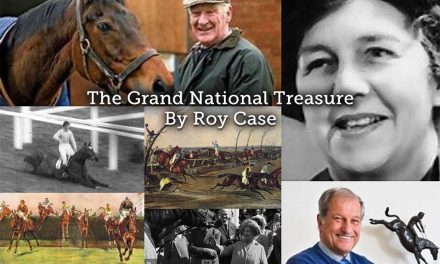 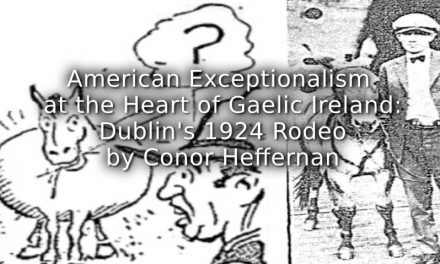