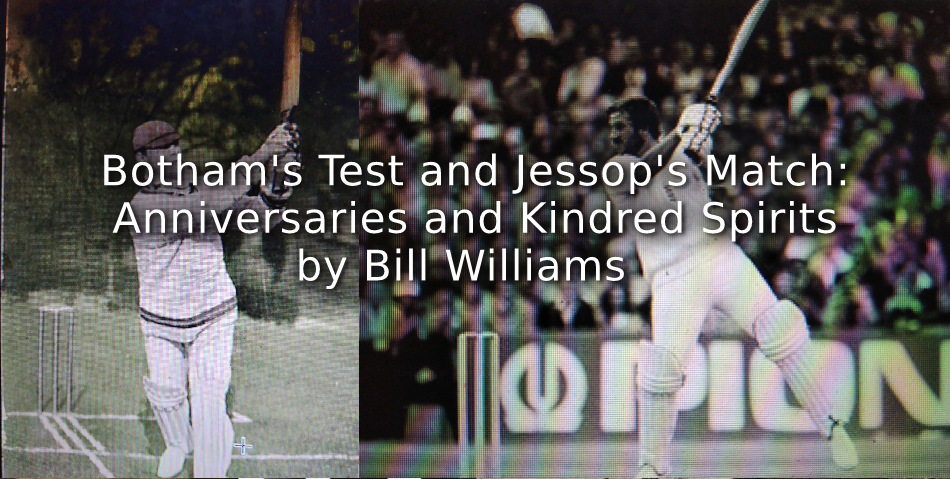 The summer of 2021 marked the 40th anniversary of ‘Botham’s test’, which for English cricket, represented a magical moment of triumph over adversity at Headingley. In 2015, Sky Sports viewers voted it, ‘The Greatest Ashes Moment of All Time’!

Ian Botham (Wisden Cricketer of the Year in 1978) had been struggling as both player and captain as the series approached and following poor performances in the first test, he fell on his sword and resigned the captaincy, throwing his future into disarray. When Botham’s form bounced back at Headingley, England still seemed hopelessly outmatched as they were made to follow on with a 227 run deficit. England were 135-7 when he was joined by Graham Dilley. He walked out and said, ”what do you want me to do?” I said, ‘enjoy yourself, I’m going to!” recalled Botham. 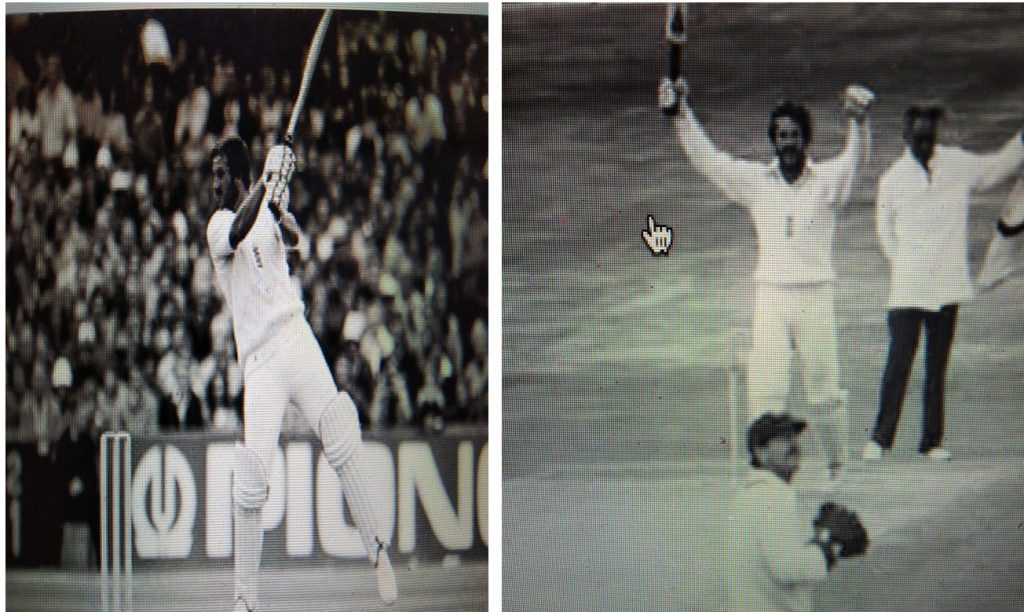 However, the apparent hopelessness of the situation, inspired one of the most remarkable displays of hitting arguably, not seen for many years.

Botham finished on 149 not out, with 27 fours and 1 six, in 148 balls. His brilliance and defiance set up the equation which Bob Willis with 8-43 solved. England triumphed by 18 runs to draw level in the series, which they went on to win 3-1. Captain Mike Brearley suggested that England had won with a  ‘cavalier village cricket’ approach of breaking loose to, ‘hit the ball as hard as you can’! This led the distinguished Cricket Correspondent of The Evening Standard, John Thicknesse, to assert that even ‘Gilbert Jessop could not have bettered it’. 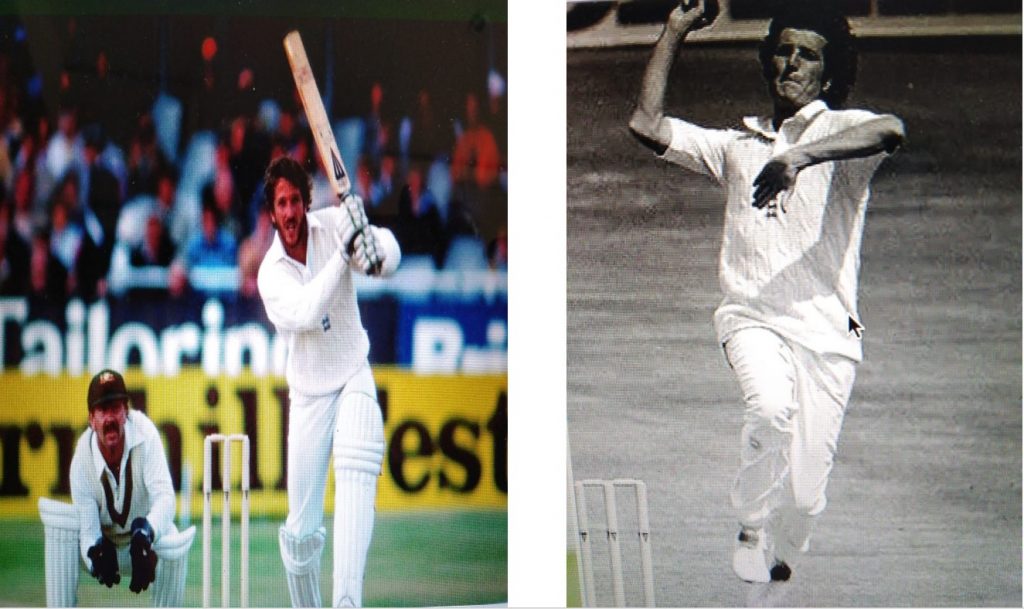 At The Oval in August 120 years ago, many would argue that Gilbert Laird Jessop, another charismatic England all-rounder, actually did!

Although one-off adjectives have often been coined to describe the style of great players, ‘Jessopian’ (an aggressive style of batting), is one of the few that have endured as a cricketing term, perhaps because the batting style it characterises is uncomplicated and easily categorised. 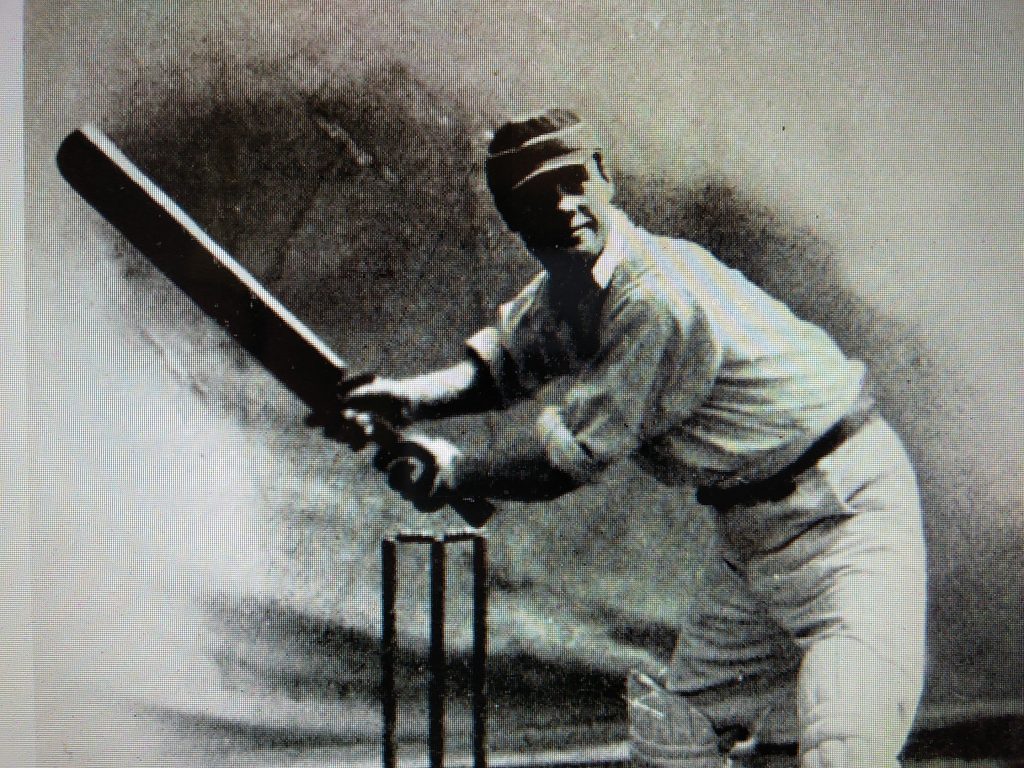 In the fifth Ashes Test in 1902, England needed 263 to win and even with a team full of ‘Superstars’, they had passed that score only once in the four preceding tests, none of which England had won!

It was an unlikely prospect and at 48-5, it looked like a lost cause. Ian Botham after all was 80 years in the future. It needed an outstanding performance by an outstanding player; that player was Gilbert Laird Jessop.

There is no doubt that Wednesday 13th August 1902 must count as one of the greatest days in the history of cricket. So much so, that The London Evening Standard invited readers to name the sporting event that they would most like to have been present at. The Oval Test was a clear winner.

The day has become immortal in the history of cricket for an incredible finish to an incredible match. Jessop launched himself at the Australian attack to score 104 in 77 minutes, including 17 fours and 1 five off 80 balls. Jessop’s score of 100 runs in 75 minutes, off 76 balls, is still the fastest test century by an Englishman and following the rule change in 1910 regarding sixes (to register a six the ball had to be hit out of the ground), would have equated to 100 in 68 minutes! It was THE innings to epitomise cricket’s ‘Golden Age’.

Jessop (Wisden Cricketer of the Year 1898) having been dropped due to a loss of form, was recalled for the final test and the team differed in three instances from the team that had played in Manchester; Hirst, Hayward and Jessop took the places of Ranji, Bell and Tate. The invitation to Jessop was worded in a

somewhat rummy fashion, it being suggested that I owed selection to the fact that I could be used as a fast bowler for a few overs, as my days of fast bowling had ended, I intimated to the chairman of selectors that if my selection had been mainly  influenced by that stipulation, it would perhaps be wiser if they chose someone better to fill the bill rather than myself

So reflected Jessop on his call up to the test team for the final match of a series that England had already lost.

Jessop’s bat- ‘The Crawford Excellor’ described by Neville Cardus as, ‘Jessop’s cyclone of batsmanship’.
Source: Courtesy of The MCC at Lords.

Few fancied England’s chances before the second innings started and that number dwindled when the third wicket went down for only 10 runs! Jessop’s turn to bat came after the fifth wicket fell at 48 and there were still twenty minutes before the lunch interval.

I had previously fallen victim on too many occasions to Australian bowlers owing to my propensity for the ”cow shot”, but I had it firmly fixed in my mind before I went out to bat that whatever stupid shot I might be tempted to play, I was to resist 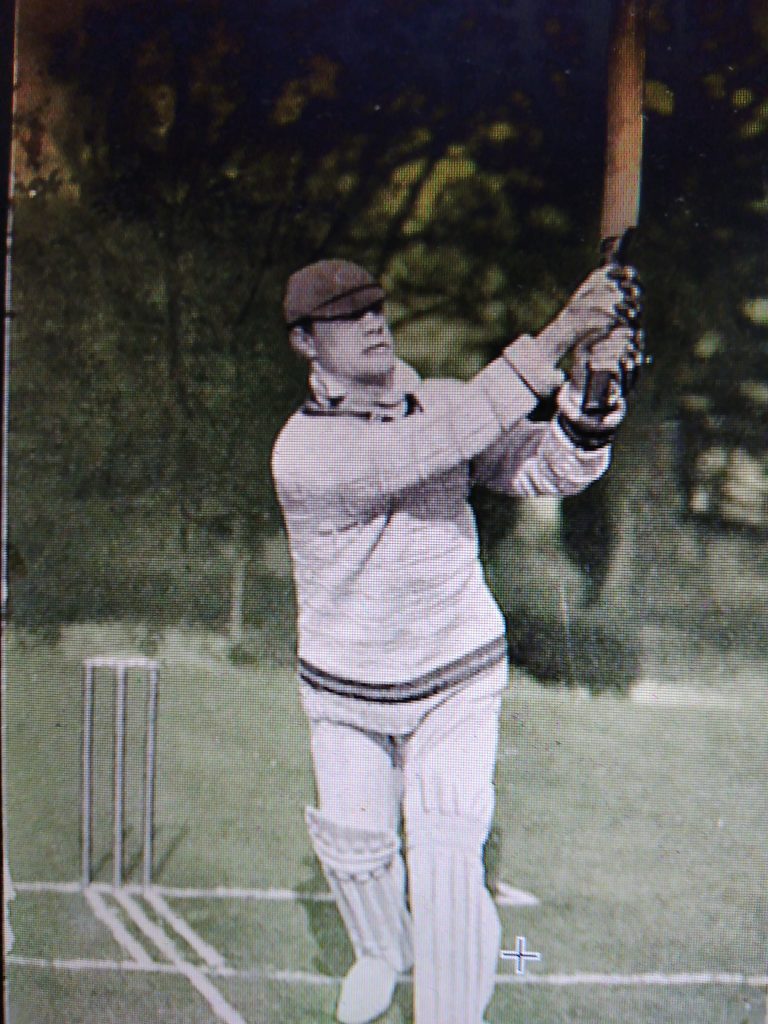 Jessop playing the ‘cow shot’.
Source:Courtesy of The Burford Tolsey Museum and archive 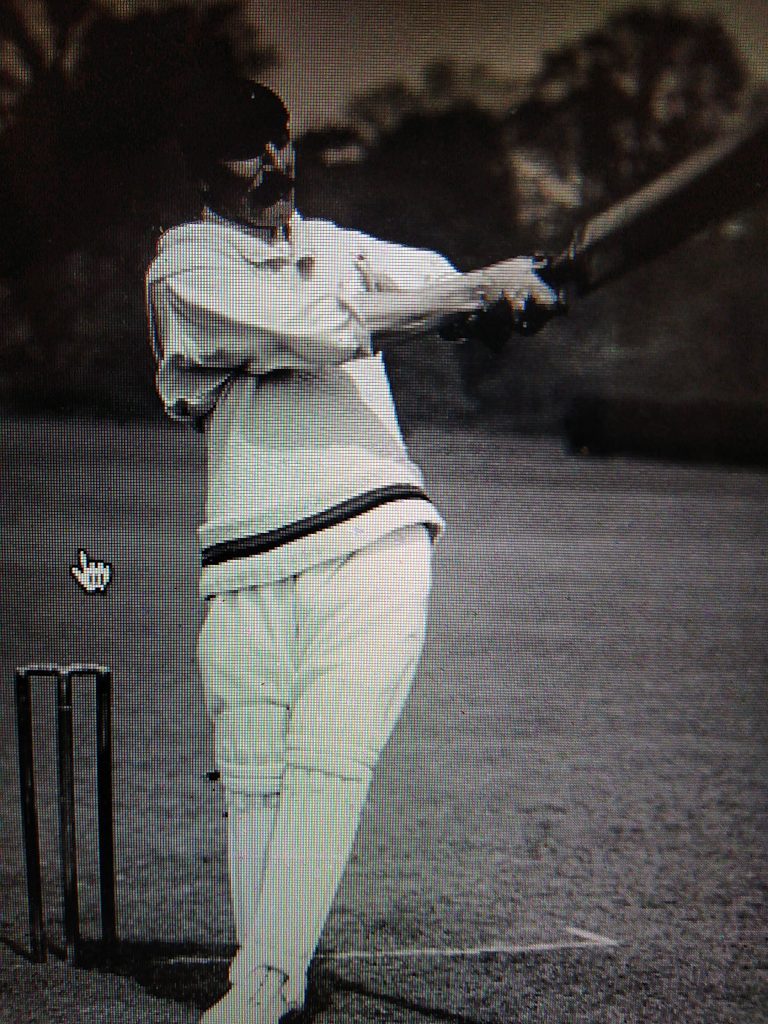 As it happened, Jessop was in fact being more careful than usual as he had been dismissed too often by the cunning Australian bowlers. With England in dire straits, however, he began treating the Australian bowling like, ‘village green stuff’. He brought up his 50 in thirty-eight balls in a partnership of 109 with F.S Jackson who only managed to contribute 18. 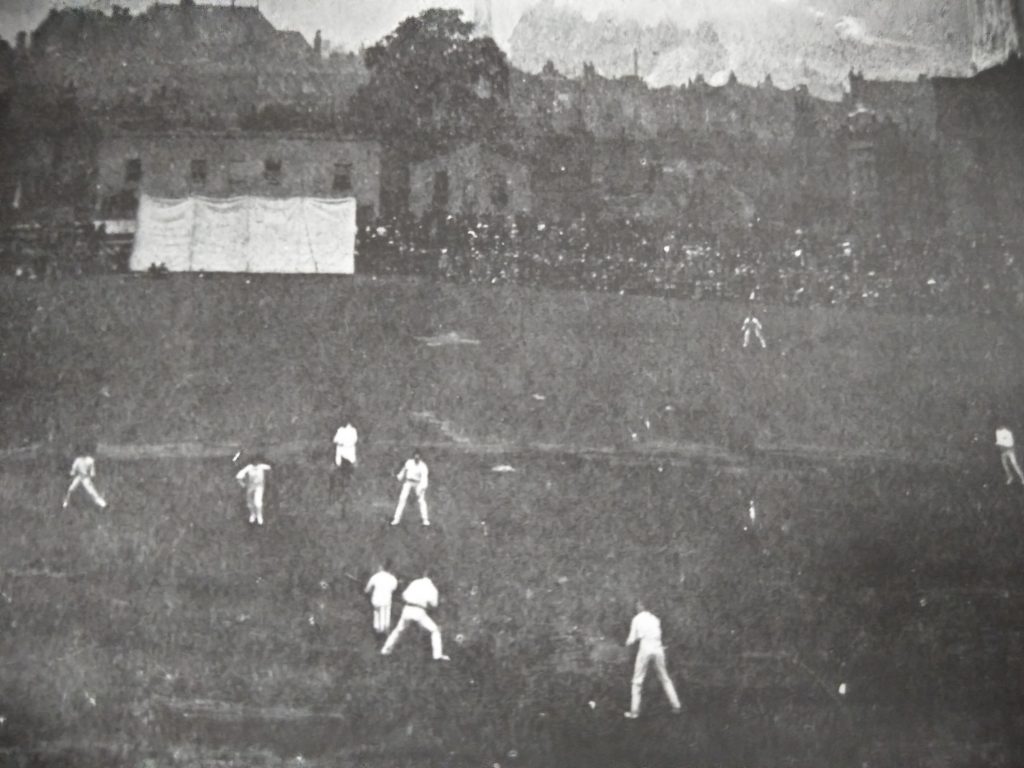 The crowd numbering around 18,000 had settled down to face the critical session after lunch, but, there was however one seat that remained empty. The future novelist P.G.Wodehouse had made his way back to his desk at the Hong Kong Shanghai bank thus missing all of Jessop’s innings! In later years he claimed that it was this event made him give up his job to focus on his writing.

Reaching his century in seventy five minutes, an eye witness commented that,

Hats were thrown into the air, handkerchiefs and mufflers were waved, cheery voices became hoarse and weak-chested yellers into coughs.

When I left there were still 76 runs to get. Fortune, however, was firmly on our side with Wilfred Rhodes having the honour of making the winning hit! The scene which followed as the crowd collected in front of the pavilion in their thousands was one of extraordinary enthusiasm. It was indeed a memorable sight- a great tribute to the power which cricket wields over our phlegmatic race – and it will ever remain fresh in my memory.

It was Jessop’s innings that makes the match remembered as. ‘Jessop’s Match’ and it would have been spectacular at any time but coming at the moment it did can be regarded as miraculous. 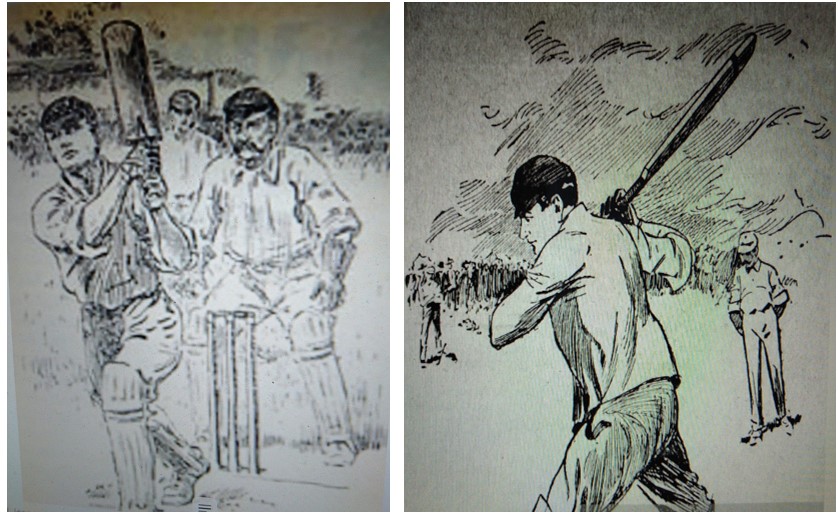 He enjoyed an overwhelming reception as he walked back to the pavilion, the Australians joining most heartily in the applause.

‘If ever an innings ought to have been filmed, that was the one’, wrote C.B.Fry. ‘It was his magic which transformed that August day. I have seen spectators at Test matches strained and excited, but this is the only test in which I have seen someone burst into tears when the winning run was scored’

No novelist, not even P.G.Wodehouse would have dared to let his hero score a century against the Australians in an Ashes Test match, at such a pace at such a moment in such a match. 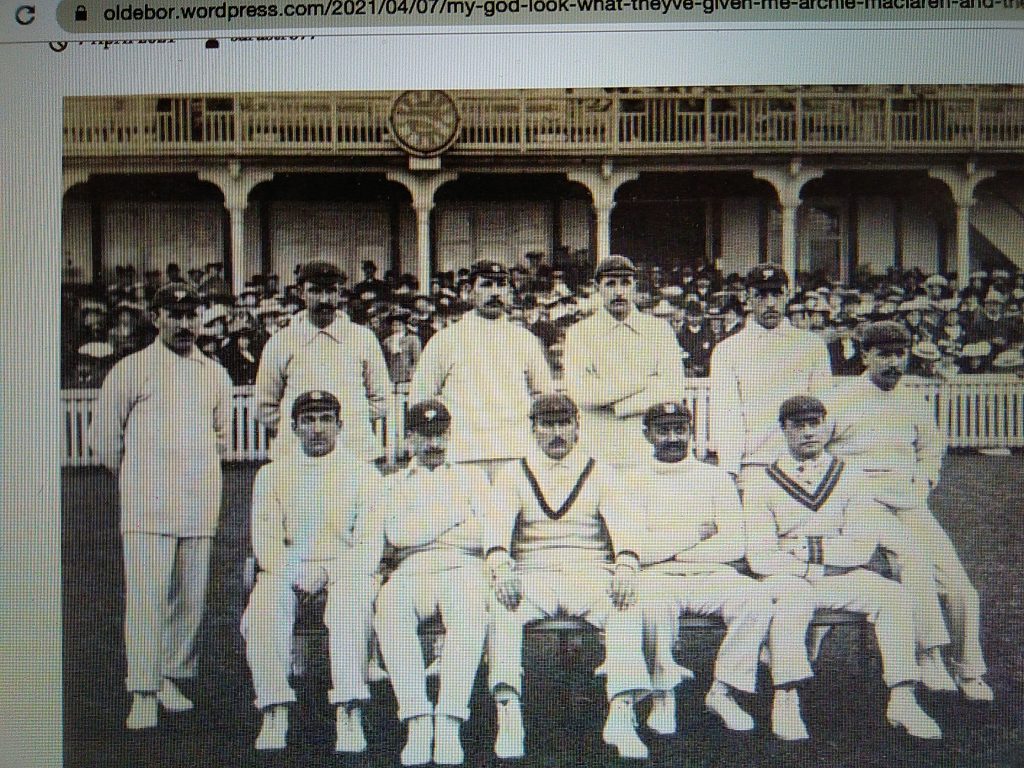 The England team for the Oval Test.
Jessop is far right sitting on the front row. 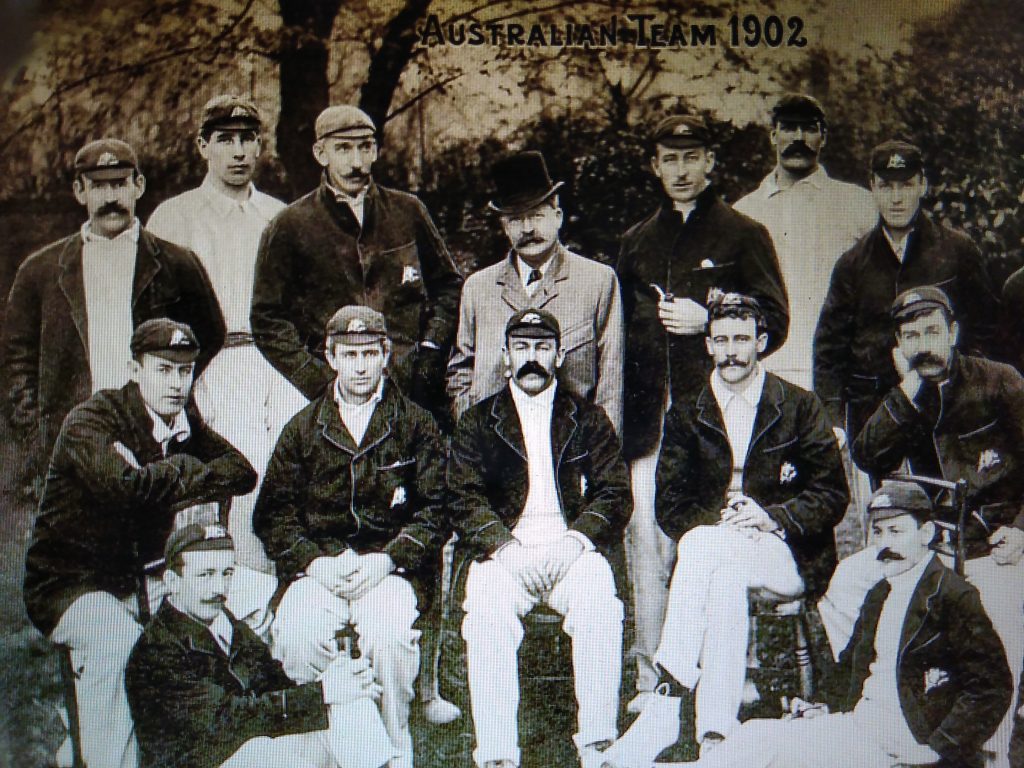 The Australian Team for the 1902 Ashes. Captained by Joe Darling (.in the centre of the front row with moustache). 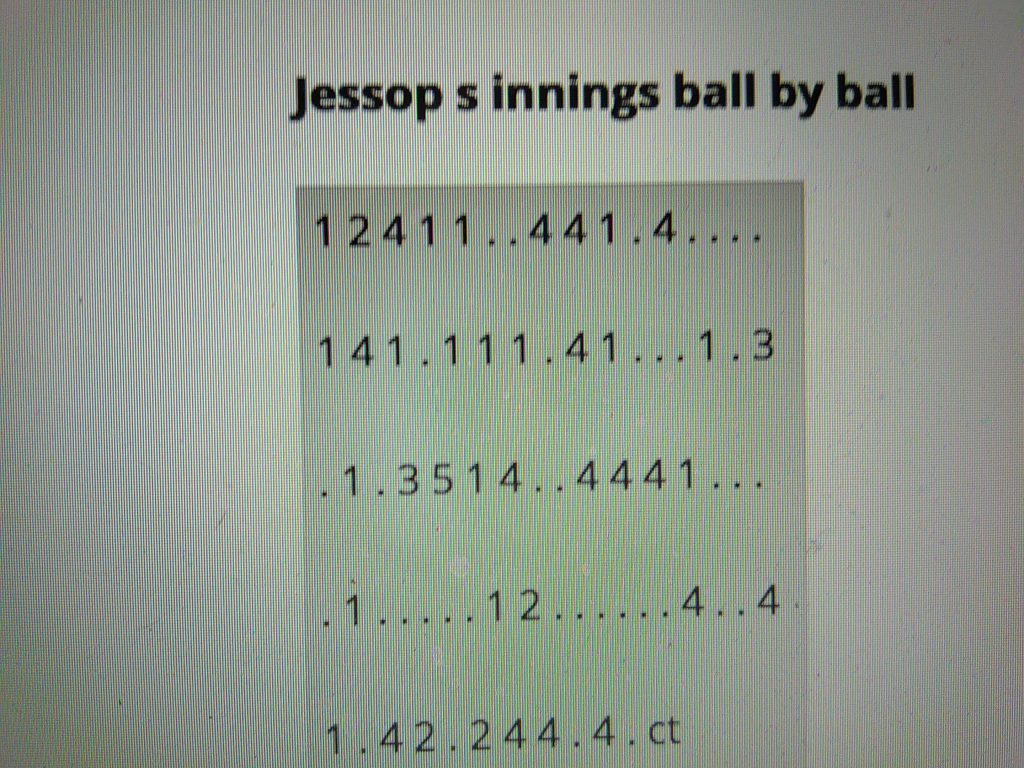 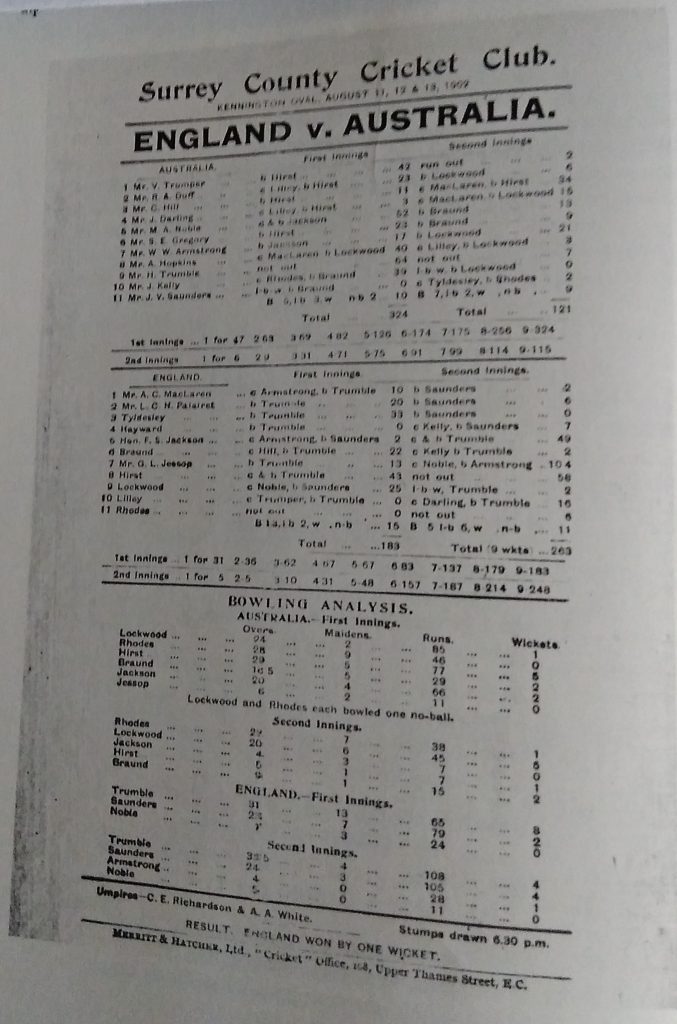 Jessop played in 18 tests and never scored another century, but his immortality was secured with 77 minutes of cricketing carnage. It was the fastest Test Ashes century ever scored and remained so until Adam Gilchrist’s fireworks at Perth in 2006/07; a fantastic innings, but one compiled in a wholly different context. The Edinburgh Evening News reported that,

The one and only Gilbert Jessop represents at once the uncertainty and splendid possibilities of cricket.

As long as cricket lasts, Mr Jessop’s great performance will be remembered.

Jessop took an apparently lifeless match and by fabulous hitting gave it a breath of a chance, 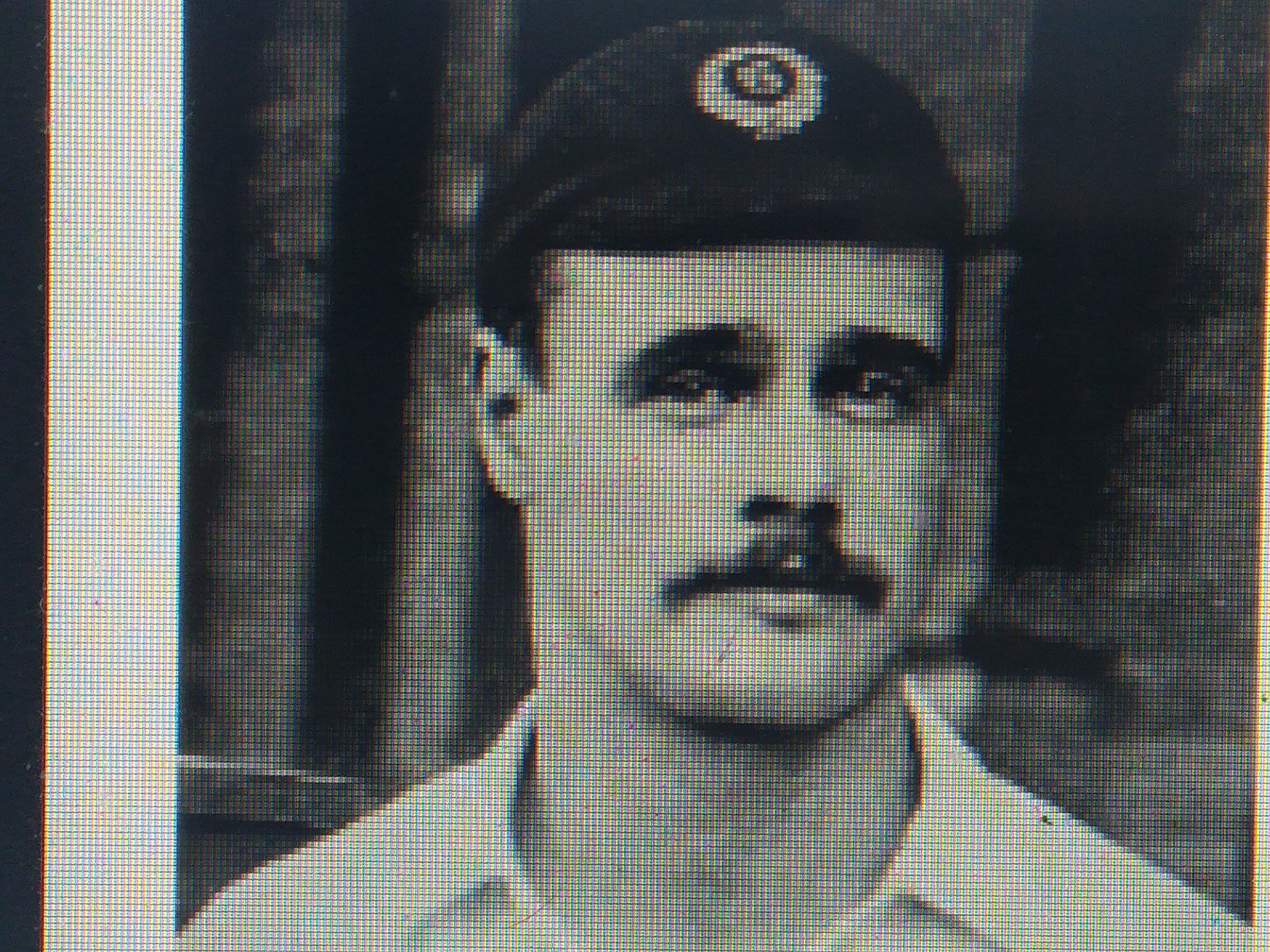 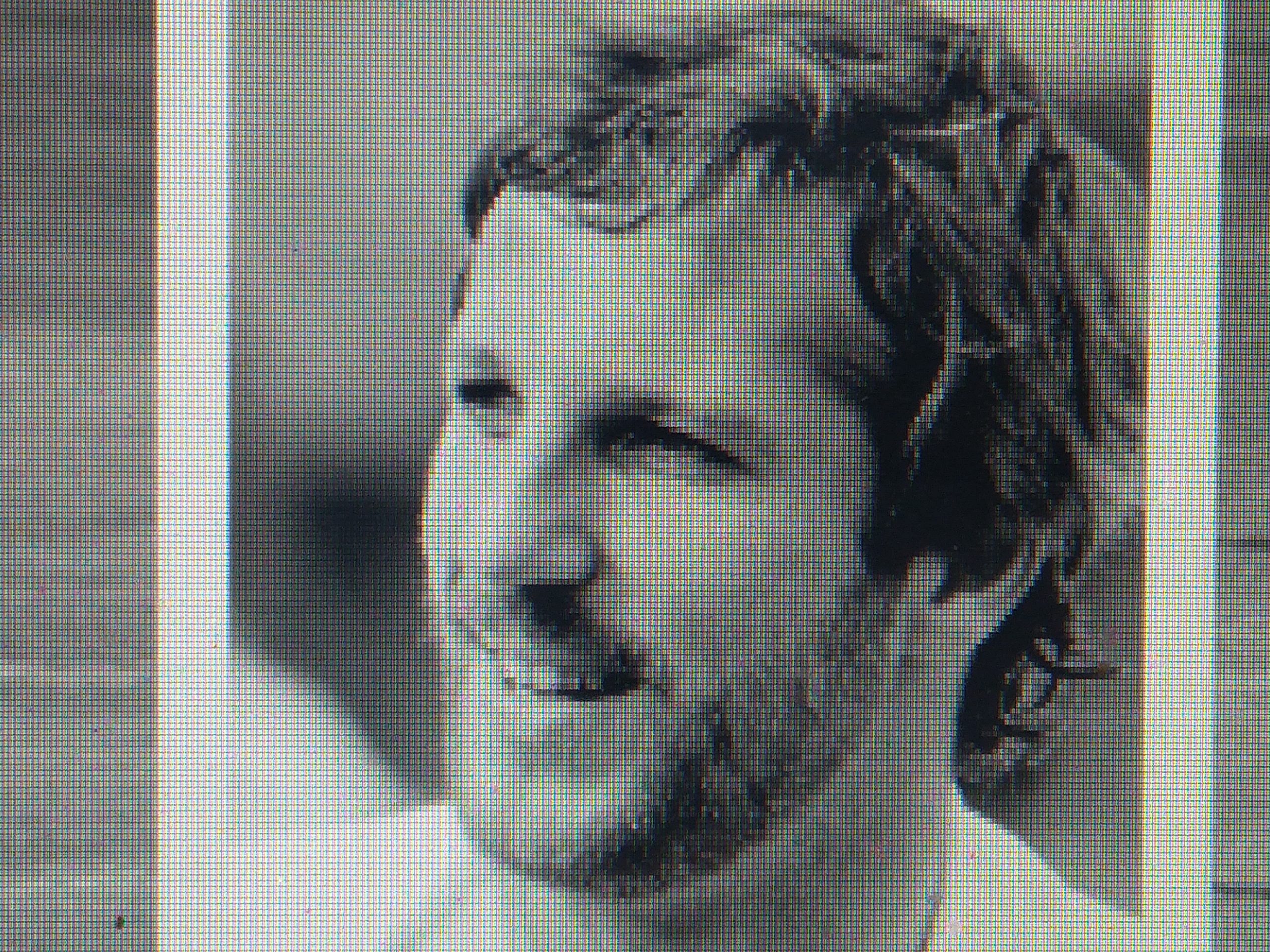 G.L.Jessop and I.T.Botham were kindred spirits, cut from the same cloth, who saw themselves not just as cricketers, but as entertainers. Spectators loved them and there was always an air of excitement and expectation when they came out into the middle. Both men triumphed in the face of adversity and have Test matches named after them to prove it and deservedly form a part of cricket’s rich folklore. 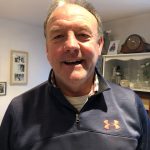 Bill was Head of Physical Education and sport at Burford school in Oxfordshire, from 1987- 2019. Since retiring in 2019, he has spent time researching the sporting history of the school, as part of the Old Burfordians Association . 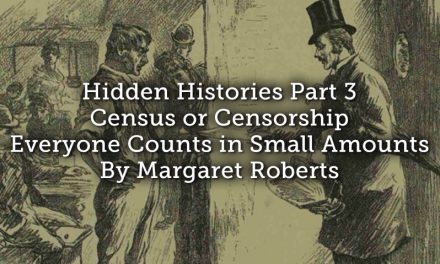 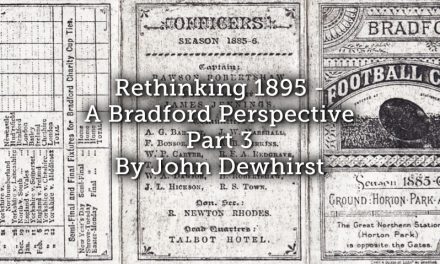 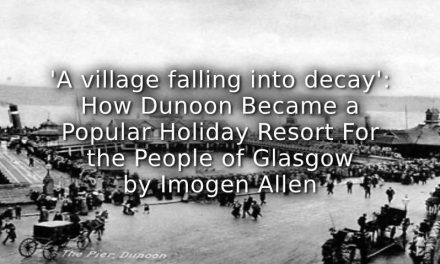 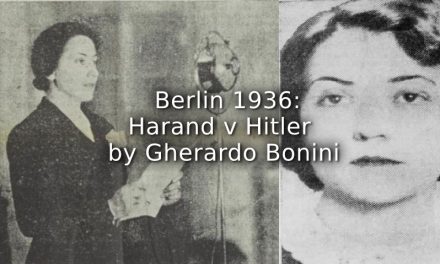