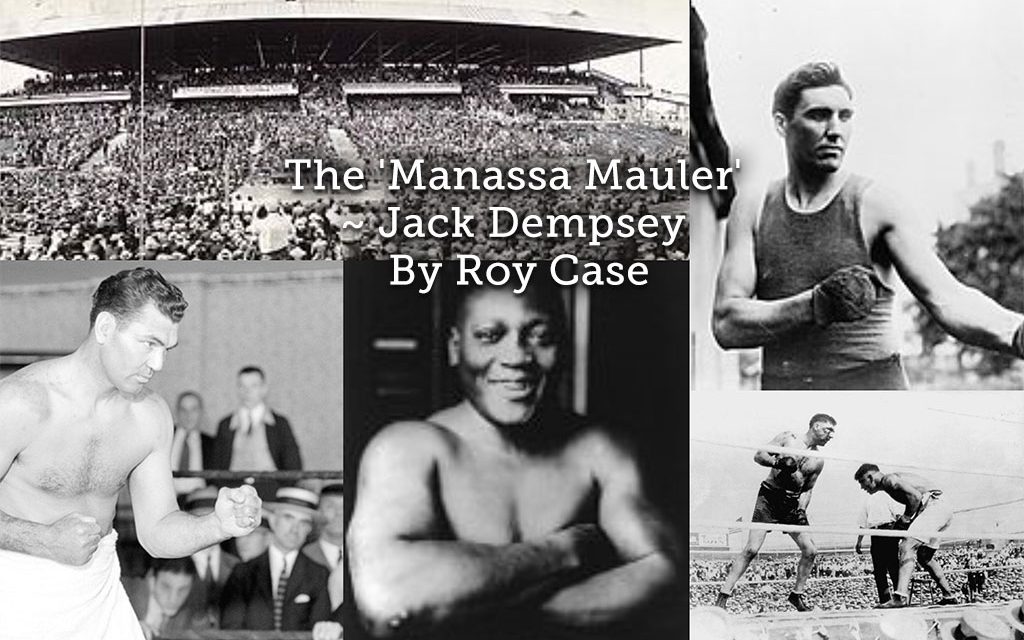 Was Jack Dempsey one of the greatest heavyweights of all time ?

Clearly this is a claim that can never be proven.

He was however a splendid example of the best of boxing. Undoubtedly one of the sport’s finest ambassadors, and maybe one of a few great champions who went out of his way to help, without asking ‘How much ?’

Nicknamed the ‘Manassa Mauler’, Dempsey loved the fight game, and never had a bad word to say about boxing writers, even those who criticised him.

Jack was born and raised in a poor family in Manassa, Colorado, West Virginia, and Utah. His father suffered great difficulty in finding work, and as such the family frequently found it necessary to have to move home. As a youngster Jack dropped out of elementary school in order to find work, and in the end left home at the age of 16. Desperate for money, he would habitually travel underneath trains, sleep in hobo camps, and visit saloons, where he challenged the patrons to fights, declaring ‘I can’t sing and I can’t dance, but I can lick any SOB in the house’. He rarely lost the subsequent brawls.

A century ago, as US President Woodrow Wilson was hard at work helping re-build  the US economy following World War I, Jack Dempsey was training hard, in preparation for his impending title fight against the current world heavyweight champion, the fearsome Jess Willard [1881-1968].

Willard worked as a Kansas cowboy until he was 27 years old, before embarking on a career as a professional fighter. Standing 6 feet 6½ inches tall, and weighing in at 235 pounds, he was the tallest and largest heavyweight in boxing history. Known as the ‘Pottawatamie Giant’, after his birth place, Willard was renowned for his great strength, and capacity to soak up crushing punishment. Willard claimed the world heavyweight crown in April, 1915, watched by a crowd of 25,000 fanatical fight fans, at the Oriental Park Racetrack, in Havana, Cuba. Willard KO’d the ‘Galveston Giant’, Jack Johnson [1878–1946], in round 26 of a scheduled 45 round contest. Johnson had ostensibly won every round, up until round 20, when he was visibly hurt by a barrage of body punches delivered by Willard, and quickly began to tire.

The first African American world heavyweight boxing champion, Johnson held the title for more than four years, considered at the time as one of longest periods in the heavyweight division. 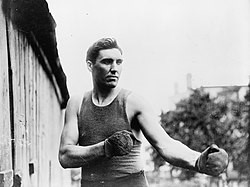 Jack Dempsey won the fight against Jess Willard and claimed the heavyweight crown on Independence Day, the 4 July, 1919, in the city of Toledo, Lucas County, at the western end of Lake Erie in northwest Ohio, in one of the most savage beatings ever seen in a championship bout.

The Kansas cowboy was knocked down for the first time in his career during the opening round, and another seven times before the bell was sounded to end it. Disputed reports claim he suffered broken ribs, a shattered jaw, broken nose, four missing teeth, and the partial loss of hearing in one of his ears, along with numerous other cuts and contusions. Although Jess fought on for two more rounds, he relinquished the title while still on his stool, overcome by the injuries he received in the first round.

After being fired by Dempsey, his manager, Jack Kearns, gave a controversial account of the fight in Sports Illustrated, which became known as the ‘loaded gloves theory’.

Kearns is alleged to have informed Dempsey he had wagered his share of the purse on the ‘Manassa Mauler’ to win by a knockout in the opening round. Maintaining he had applied plaster of Paris to the bandages on the fighter’s hands. Although it is claimed, the founder and editor of The Ring magazine, Nat Fleischer, watched Dempsey’s hands being wrapped, asserting the plaster of Paris story was untrue, and ‘Jack Dempsey had no loaded gloves, and no plaster of Paris over his bandages’.

Further controversy was fuelled by the allegation Dempsey had left the ring at the end of the first round, thinking the fight was over. Although the officials in Willard’s corner did not raise any objection, this was seen by some as an infringement of the rules.

Immediately after the fight was over, Willard acknowledged,

‘Dempsey is a remarkable hitter. It was the first time that I had ever been knocked off my feet. I have sent many birds home in the same bruised condition that I am in, and now I know how they felt. I sincerely wish Dempsey all the luck possible and hope that he garnishes all the riches that comes with the championship. I have had my fling with the title. I was champion for four years and I assure you that they’ll never have to give a benefit for me. I have invested the money I have made’. 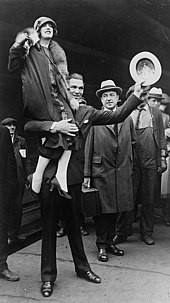 Dempsey holding his wife Estelle Taylor on his shoulder 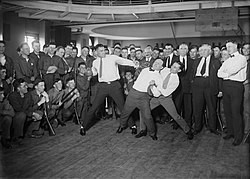 Following his victory, Dempsey became one of the richest athletes in the world. During the 1920s he became an iconic personality travelling around the country, defending his heavyweight title, fighting exhibition bouts, making public appearances, movies, and endorsements. His aggressive fighting style and exceptional punching power made him one of the most popular boxers in the history of the fight game.

Although his popularity was dented somewhat when the US entered World War 1, and Jack took up employment in a shipyard and continued boxing, and disillusioned fight fans were critical of him for not enlisting. It was not until it was later revealed he had made an attempt to join the US Army, but failed the medical, that his popularity was restored.

After the war Dempsey spent two years ‘bumming around’, before returning to the ring, when he fought 17 bouts, winning 15, with one loss, and one no-decision. The following year he won five consecutive bouts by knockout in the first round.

Dempsey would reign as world heavyweight champion for seven years from 1919 to 1926. In September 1926, he fought the Irish American Gene Tunney in Philadelphia. Tunney had only lost once in his career, and yet in spite of his record, he was considered the underdog against Dempsey. The match ended in an upset, when Dempsey lost his title on points in a 10 round bout. On his return to his dressing room after the fight, the defeated Dempsey enlightened his wife, saying ‘Honey, I forgot to duck’. A quote borrowed 55 years later by US President Ronald Reagan  when his wife Nancy visited him hospital after the attempt on his life.

Following an unsuccessful rematch with Tunney, Dempsey hung up his gloves and retired from ring, although for a while he continued to fight a number of exhibition bouts.

Ranked tenth on The Ring magazine‘s list of all-time heavyweights, and seventh among its Top 100 Greatest Punchers, his fights set financial, and attendance records, including the first million-dollar gate.

The death of Jack Dempsey, in New York City in May, 1983, at the grand old age of 87, defying the claim that boxing is harmful to the health, and bringing to an end a great boxing era. The final link with the days of huge crowds, open-air fights, and million dollar gates, much of which may be attributed to the great Jack Dempsey, who will always be included in the list of the boxing’s all-time greats. 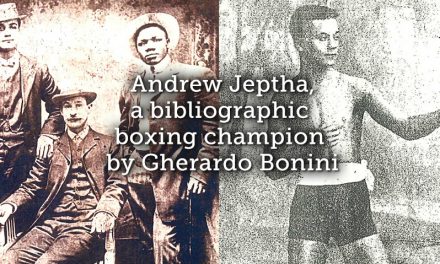 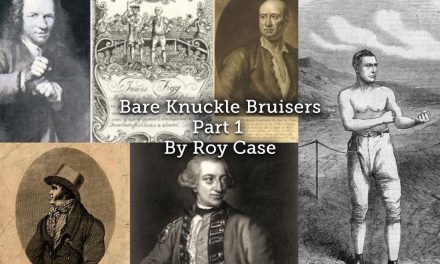 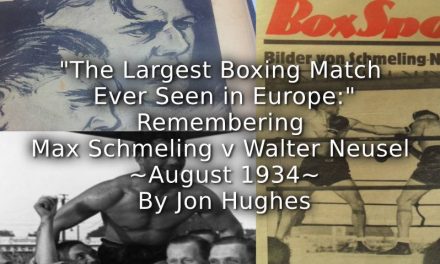 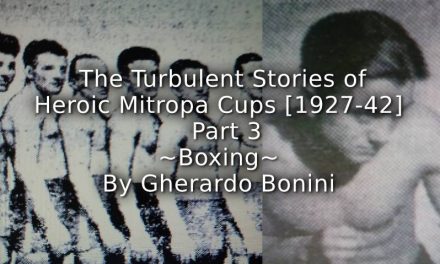